Not Why. Why Not?

In the recent debate over gun control, a question has emerged that goes something like this: "Why does anyone need an assault rifle?"

It's a tough question for people who are pro-gun to answer. "Because of the Second Amendment" doesn't quite do it because then the conversation devolves into talk of muskets and Founder intent. There is obviously no rational argument for using assault rifles to hunt, or to protect one's home. And talk of civil unrest or government abuse just makes you sound like a militia nut.

The anti-gun people would seem to have the upper hand ... but only if we accept the question. Thinking Americans shouldn't. The question isn't "why" -- it's "why not?"

Here's what I mean: The premise of our country is that individuals have a right to be free. Some freedoms need to be restricted for the common good, of course, but the burden is always on those who want to do the restricting.  THEY have to make the case. Not the other way around.

Other countries -- authoritarian regimes, for example -- start from the opposite premise. Individuals have no rights except those expressly granted by the divine ruler or the divine collective. But not here. People forget this when they ask, or fall for, questions like the above.

The correct question for Americans to debate would be, "Does the government have a compelling case to restrict the freedom to own assault rifles?" Who decides, of course, is clearly spelled out in this case -- in the amendment process of the Constitution. This is where the Second Amendment argument can be made. The fact is, the freedom to bear arms was considered so important, it is one of only a few freedoms expressly mentioned in our Constitution.  This means the burden is squarely on the anti-gun people when they want to limit this right. They have to convince enough legislators to amend the Constitution.

People will argue that point, of course. Common sense restrictions and all that. But those arguments don't usually stand up to rigorous analysis because there is nothing "common sense" about the limitations proposed. Pistol grip styles and magazine capacities are just two recent examples.  As if a magazine with 7 rounds instead of 10 rounds would have prevented the slayings that sparked this debate.

The absurdity is further illustrated when you switch out the constitutional right. Suppose, for example, politicians were suggesting similar restrictions to the First Amendment. You can assemble, but you can't use a megaphone with too much volume. You can assemble, but you can't have more than X people because high-volume crowds have a greater tendency to riot. You can print a newspaper, but you are limited to a certain number of pages or issues. And so on.

At the very least, it seems inconsistent to enforce the First Amendment to the point of allowing the most disgusting forms of pornography to be published and the most religiously offensive "art" to be displayed, but allow the Second Amendment to be narrowed down to the controlling of the kind of butt stock a rifle owner can use (true story).

Another way of looking at the problem with the question atop this post is to zero in on the word "need." "Why does anyone NEED an assault rifle?" OK, you got me. No one really needs an assault rifle. But so what? Let me give you a short list of other things people don't NEED:


I purposefully avoided zero-harm items like giant flat-screen TVs because it's too easy to attack those examples with arguments like, "Flat screens don't kill people!" Tobacco, alcohol, junk food and vehicles do kill people. But this is missing the point.

We are talking about needs, and as Americans we have rights that transcend needs. In other words, we don't have to need something to be free to have it. That's the beauty of our country. We have the right to pursue happiness, which usually has nothing to do with needs. It's usually about wants. And if I want to own and shoot an assault rifle, why shouldn't I?

Why not? That's the question the anti-gun people need to answer. And they need to make a very persuasive case. The burden is on them. 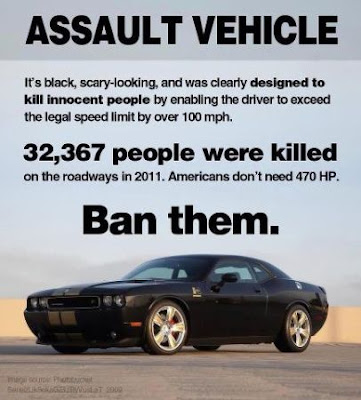