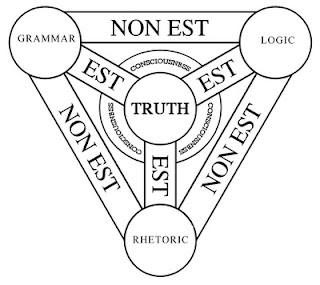 Recently, I discovered something called the "Trivium." It is nothing less than the foundation of all truth and reasoning.

The Latin word is a singular form of "trivia."* Literally, it means "the place where three roads meet" ("tri" + "via"). Classically, it is the three language arts: grammar, logic and rhetoric.

"For the medieval student, the trivium was the curricular beginning of the acquisition of the seven liberal arts; as such, it was the principal undergraduate course of study," according to Wikipedia.  The remaining four arts, called the "Quadrivium," were arithmetic, geometry, astronomy and music.

This concept excites me because it is forgotten and yet fundamental. If the pursuit of knowledge has a starting point, this is it! The word itself is also exciting because it is a trinity: three in one. Consider the form and imagery of the word: "tri" with a singular suffix. Three converging into one. This parallel has been noted by others as is apparent from the "Shield of the Trinity" representation of the concept above.

In the future, I plan to revisit the first principles of the Trivium by studying and applying its thinking skills. Any posts I write that connect to it will be appropriately tagged.


* According to Wikipedia, the connotation of the word "trivia" or "trivial" arose from the contrast between the simpler trivium and the more difficult quadrivium.