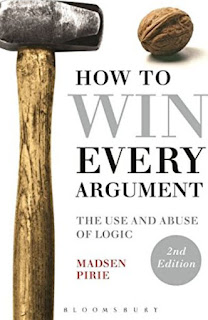 In Madsen Pirie's excellent book, How to Win Every Argument: The Use and Abuse of Logic, I came across a interesting entry under the heading: "Vercundiam, argumentum ad."

This is the logical fallacy known as "appeal to (false) authority." It literally means "argument to modesty." The Latin root gave us the archaic English word "verecund," meaning "bashful, modest." I infer this connects with the logical fallacy because the victim of an ad verecundiam attack is supposed to submit, feeling bashful, when the implied authority is brought to bear.

However: "While it is perfectly in order to cite as supporting witness someone who has specialized knowledge of the field concerned, it is a fallacy to suppose that an expert in one field can lend support in another," Professor Pirie writes. "Unless he has special expertise, he is a false authority."

He gives an example with commentary:

(Close examination shows few, if any, whose expertise is in evolutionary biology.)

In the Wikipedia entry for this fallacy, there is a great quote from the late Carl Sagan. "One of the great commandments of science is, 'Mistrust arguments from authority,'" he said. "Too many such arguments have proved too painfully wrong. Authorities must prove their contentions like everybody else."

With all this talk of science, my mind immediately went to a common claim of global warmists. A tweet from President Obama in May of 2014 is representative: "Ninety-seven percent of scientists agree: #climate change is real, man-made and dangerous.” Everyone from leaders at NASA to Bill Nye the Science Guy has repeated a version of this statistic. However, as Professor Richard Tol has pointed out, the 12,000 papers underlying this figure include a large number by scientists who don't specialize in the "detection and attribution of climate change."

Contrary to popular accounts, very few scientists in the world – possibly none – have a sufficiently thorough, 'big picture' understanding of the climate system to be relied upon for a prediction of the magnitude of global warming. To the public, we all might seem like experts, but the vast majority of us work on only a small portion of the problem.

Like non-biologists commenting on evolution, these scientists lack the authority to conclude that global warming is "real, man-made and dangerous." Thus, I conclude the '97 percent' claim is fallacious on the grounds that it is an argumentum ad verecundiam.