Inside the Mind of President Trump 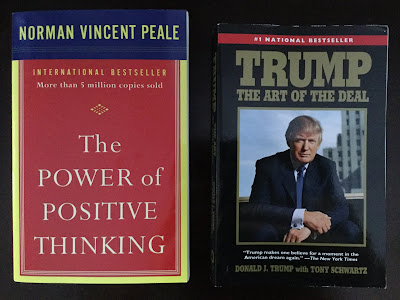 To get inside the mind of our president, I read The Power of Positive Thinking by Norman Vincent Peale and will be reading Trump: The Art of the Deal
. As I read, I am adding quotes here that are relevant to my intent, so check back if the page isn't yet complete.
To any anti-Trumpers who may arrive here: If you find yourself interested but conflicted, remember the words of expert negotiator and Harvard professor Robert Mnookin: "Empathy does not require sympathy. Empathizing with someone does not mean agreeing with, or even necessarily liking, the other side."
The Power of Positive Thinking
President Trump was heavily influenced by the thinking of Pastor Norman Vincent Peale. As a child, he attended the Marble Collegiate Church in Manhattan, where Peale was the senior minister. Pastor Peale also officiated at Trump's first marriage to Ivana in 1977. When asked about his religious background during the 2016 campaign, Trump frequently mentioned Peale.
Pastor Peale originally published the The Power of Positive Thinking in 1952. It was updated several times and has sold more than five million copies worldwide. Below is a selection of quotes from the book.
Many have wondered how President Trump has so much energy at his advanced age. Pastor Peale's philosophy may help explain it:
President Trump is famous for declaring things are "the best" and expecting that to be true. Pastor Peale had some things to say about that:
How has President Trump stayed so confident even when success seemed unlikely? Pastor Peale's advice may be the reason:
Of course, Pastor Peale had a lot more to say about positive thinking:
That was the last quote from the book that struck me as relevant to understanding President Trump. There is much more to the book and many things I appreciated personally and from a Christian perspective — but that's a post for another time.
Visit Amazon to get your copy of The Power of Positive Thinking by Norman Vincent Peale.
The Art of the Deal
This is the famous book Trump published in 1987. The very first thing I noticed was the cover quote: "Trump makes one believe for a moment in the American dream again." Its source? The (Failing) New York Times! How things have changed ...
Below is all the quotes from the book that grabbed my attention.
Philosophy & Personality


Victor Palmieri: “Trump ... He’s almost a throwback to the nineteenth century as a promoter. He’s larger than life.” I was relentless, even in the face of the total lack of encouragement, because much more often than you’d think, sheer persistence is the difference between success and failure.”

Deals & Negotiating
Managing People
Fighting Back
The Media
Early Political Thinking
Then & Now
That was the last quote from the book that struck me as relevant to understanding President Trump. Mission accomplished!
The next book I will read in my unofficial 'understating Trump' series is, "How To Stand Up for Your Rights & Win!" by the late Roy M. Cohn, Trump's long-time attorney. I am fascinated by the man's life and his philosophy, and I'll be looking for tactics of his that Trump may be using today.