Giving Money to the Government 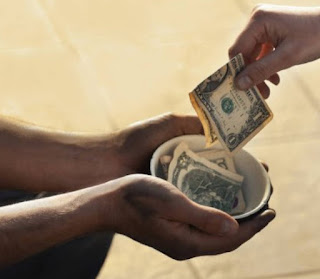 When you give money to the government, where do you imagine it goes?

I first thought of this question when reading a ProPublica article about how tech billionaire Peter Thiel used the structure of a Roth IRA to amass a fortune in tax-free wealth. ProPublica was clearly outraged. They wrote that Thiel “deprived the U.S. government of untold millions in tax revenue. Perhaps billions.”

(When I emailed that quote to a friend, I joked that I had fixed it and added “that it would have wasted on useless, inefficient projects and handouts to political cronies.” What did Thiel do with the money instead? He built Palantir, a company that among other things helps shut down terrorists.)

Thinking more about this recently caused me to look up some statistics and then work to make them more relatable. What follows is the result of that exercise.

To begin, imagine the person you want to help when you give a dollar to the federal government. The image in your mind is something like the image at the top of this post, isn't it?

Now realize that for every dollar you give, this is more like what happens:

The remaining pocket change is split between helping the poor person you imagined (about 8 pennies), educating a child (2 pennies), fixing a road (2 pennies), and other pro-social endeavors.

That isn’t even completely accurate since those pennies for poverty assistance, education, infrastructure and so on are all filtered through giant bureaucracies rife with corruption, waste, fraud and abuse.

So once again: Imagine the person you want to help when you give money to the government, and then realize he or she only gets whatever little trickles down.* Most of your money goes to the affluent, the corrupt, government-sanctioned killers and the like. If you had a choice, would you voluntarily give money to such an organization? More to the point: Wouldn’t you do everything you could to minimize the amount of money such an organization received?

Now let's get really crazy. Let's think about tax “cheats.” I don't mean people like Thiel who avoid taxes using legal loopholes. I mean people who actually lie to the government in order to keep their dollars for themselves. Are these bad people?

Let's make it worse. Let's think about the most selfish thing a person could do with that money they kept. Buy a yacht? Buy a mansion? Fly in a private jet while sipping the finest champagne?

Is that worse than giving the money to the federal government? Think it through.

-----
* I used the phrase “trickles down” intentionally. The idea that tax breaks for businesses, investors and entrepreneurs benefit society by promoting economic growth has been disparaged as "trickle down" economic theory. Such critics fail to realize that giving the money to the government involves the same sort of theory. After all, taxes aren't direct payments to the less fortunate. Tax money is filtered through the government and government-favored organizations. If we accept the premise of the criticism, then it's all trickle-down economics in the end. The question becomes: Who does a better job of trickling?