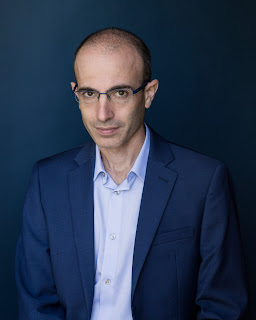 “The Americans got the idea of equality from Christianity, which argues that every person has a divinely created soul, and that all souls are equal before God. However, if we do not believe in the Christian myths about God, creation and souls, what does it mean that all people are ‘equal’? Evolution is based on difference, not on equality...

“And what are the characteristics that evolved in humans? ‘Life’, certainly. But ‘liberty’? There is no such thing in biology. Just like equality, rights and limited liability companies, liberty is something that people invented and that exists only in their imagination. From a biological viewpoint, it is meaningless to say that humans in democratic societies are free, whereas humans in dictatorships are unfree.”

When I quote people on this blog, that usually implies I admire their thinking and agree with their conclusions. With the quote above, that isn't exactly the case. I'm not really a Harari admirer, and I only agree with his quote in a particular sense. That is, I think he's absolutely right about there being no basis for equality and rights in nature.

As I wrote recently to a friend: Isn’t Harari's quote a perfect rejoinder to the atheist who claims Christianity and the Bible are misogynistic, homophobic, racist or whatever? It seems every other atheist I encounter online is allegedly offended by my faith for these reasons. But these are moral reasons, and that creates an interesting dilemma.

When debating such people, I often ask the question this way: What's the basis for your morality? Atheists say they reject God and religion and embrace science instead. But this leads me to make the point Harari is making: There is no morality in evolution. The only reason an atheist thinks people of all races, genders, preferences, etc. should be equal is because of Judeo-Christian beliefs from the Bible.

This is the atheists' dilemma: The basis of their morality is the very book and religion they reject out of moral outrage.