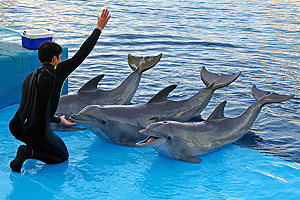 When someone does something that angers or upsets you, doesn't getting it off your chest feel great? Bad news: That can actually work against the goal of getting that person not to do it again.

It turns out one of the best ways to train humans to stop bad behaviors is to employ a trick used to train dolphins. It's called “Least Reinforcing Syndrome” or LRS. In a (now famous) article for The New York Times titled, “What Shamu Taught Me About a Happy Marriage,” Amy Sutherland explains:


When a dolphin does something wrong, the trainer doesn't respond in any way. He stands still for a few beats, careful not to look at the dolphin, and then returns to work. The idea is that any response, positive or negative, fuels a behavior. If a behavior provokes no response, it typically dies away.

This is counter-intuitive at first, but then it make sense. Like animals, we are hard-wired to create associations between a stimulus and a response — even if it’s an unconscious one. Thus, even a negative reaction can have the perverse effect of reinforcing a behavior. A reaction, any reaction, becomes a reward. But no reaction? That isn’t satisfying in any way, so the perverse motivation to repeat the behavior is removed.

I haven't found the need to use this in my marriage, but it works wonders with my four-year-old. Her tantrums are epic and neither threats nor appeasement do anything but fuel her fire. The only thing that works is LRS. It's amazing to watch how effective it is.

Want to learn more? Check out the NYT article.