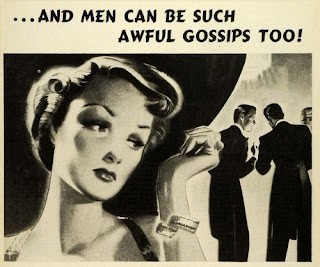 Social risk is the idea that the perceived opinions of others affect what actions we take. A good example is when we make a purchase decision. In his book, In Search of the Obvious, the late advertising master Jack Trout presents the social risk question as: "How will I look to my friends and neighbors if I buy it?"

In this view, social risk is a barrier to purchase that must be overcome. However, much like its close cousin social proof (aka consensus), social risk can also be used to persuade toward a purchase. A great example is, "How Advertisers Convinced Americans They Smelled Bad," a fascinating article in Smithsonian magazine. It tells the story of Edna Murphey, a young entrepreneur who introduced the first commercially successful antiperspirant.

Murphey launched her product, "Odorono," in 1912 at an Atlantic City exposition. The product had a slow start and struggled until Murphey started working with a novice copywriter named James Young. a former door-to-door Bible salesman, Young knew next to nothing about advertising. That's probably why he was able to come up with a breakthrough idea leveraging social risk:


Young realized that improving sales wasn’t a simple matter of making potential customers aware that a remedy for perspiration existed. It was about convincing two-thirds of the target population that sweating was a serious embarrassment.

Young decided to present perspiration as a social faux pas that nobody would directly tell you was responsible for your unpopularity, but which they were happy to gossip behind your back about.

Young's campaign was designed to convince women their odor was offensive, they didn't even know it, and that this was preventing them from getting and keeping a man. His ads generated a lot of controversy ... and were also wildly successful. As Smithsonian magazine recounts:

By 1927, Murphey saw her company’s sales reach $1 million dollars. In 1929, she sold the company to Northam Warren, the makers of Cutex, who continued using the services of ... Young to promote the antiperspirant.

The financial success of Young’s strategy to exploit female insecurity was not lost on competitors. It didn’t take long before other deodorant and antiperspirant companies began to mimic Odorono’s so-called “whisper copy,” to scare women into buying anti-sweat products.

The 'fear of whispers' is actually a great way to think of the concept of social risk.