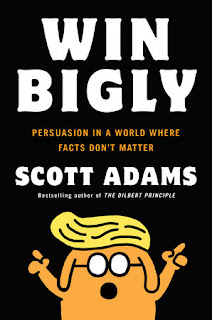 Are you still struggling to understand how Donald Trump won the 2016 presidential election – or even the Republican primary, for that matter? Do you agree with many commentators that now-President Trump should stop tweeting because it can't possibly be good for him? Then you need to read Win Bigly: Persuasion in a World Where Facts Don't Matter by Scott Adams. Immediately.

Adams, creator of the famous Dilbert comic and a certified hypnotist, says he got into political commentary when he noticed that one candidate had a unique set of skills that would allow him to mop the floor with his political opponents. As he explains in the book:


The common worldview, shared by most humans, is that there is one objective reality, and we humans can understand that reality through a rigorous application of facts and reason. This view of the world imagines that some people have already achieved a fact-based type of enlightenment that is compatible with science and logic, and they are trying to help the rest of us see the world the “right” way. As far as I can tell, most people share that interpretation of the world. The only wrinkle with that worldview is that we all think we are the enlightened ones. And we assume the people who disagree with us just need better facts, and perhaps better brains, in order to agree with us. That filter on life makes most of us happy—because we see ourselves as the smart ones—and it does a good job of predicting the future, but only because confirmation bias (our tendency to interpret data as supporting our views) will make the future look any way we want it to look, within reason.

What I saw with Trump’s candidacy for president is that the 'within reason' part of our understanding about reality was about to change, bigly. I knew that candidate Trump’s persuasion skills were about to annihilate the public’s ability to understand what they were seeing, because their observations wouldn’t fit their mental model of living in a rational world. The public was about to transition from believing—with total certainty— 'the clown can’t win' to 'Hello, President Trump.' And in order to make that transition, they would have to rewrite every movie playing in their heads. To put it in simple terms, the only way Trump could win was if everything his critics understood about the true nature of reality was wrong.

Using this lens, which Adams calls "the persuasion filter," he was not only able to predict the outcome of the primary but also the outcome of the 2016 election. He did not stop there. To further demonstrate the usefulness of his filter, Adams also predicted the various stages of the opposition's response to Trump's first year in office. He knew they would lose their minds right after the election (because of cognitive dissonance) and start believing Trump was Hitler. When reality failed to support that view, he predicted they would move on to the idea that Trump was incompetent and unable to lead the country. When that failed the reality check, they would finally admit he was effective – at ruining the country, of course.

If you've been paying attention, you've seen all of these predictions come true.

That brings us to the biggest challenge of them all: Understanding Trump's use of Twitter. Even conservative commentators who support Trump's policy positions frequently lament his use of this social medium and beg him to stop the madness. They firmly believe his tweets are compulsive, undisciplined and undermine his objectives. You won't be surprised to learn that Adams disagrees. After reading Win Bigly, you'll see Trump's tweets in a whole new light and finally understand how they are critical to his persuasion game.

In summary, Adams makes the case for why Trump should be recognized as a "Master Persuader." Then he goes even further and breaks down Trump's technique, providing a series of 31 persuasion tips. Below are 10 of my favorites, which I include here because I intend to refer back to them often.

1. Humans are hard-wired to reciprocate favors. If you want someone's cooperation in the future, do something for that person today. This is "reciprocity," Cialdini's first principle of persuasion.

2. An intentional "error" in the details of your message will attract criticism. The attention will make your message rise in importance – at least in people's minds – simply because everyone is talking about it. At a later date I'l do a separate post about this one called "the right amount of wrongness." It's fascinating ... and also horrifying to an OCD personality type like me.

3. Display confidence (either real or faked) to improve your persuasiveness. You have to believe yourself, or at least appear as if you do, in order to get anyone else to believe. This is straight out of the pickup artist (PUA) playbook. Confidence is sexy, and it doesn't just attract potential mates.

4. If you want your audience to embrace your content, leave out any detail that is both important and would give people a reason to think, That's not me. Design into your content enough blank spaces so people can fill them with whatever makes them happiest. As a writer, I've been thinking about this one a lot. I've never seen it anywhere, and it has never occurred to me before. Yet I immediately understood it to be true. Brilliant.

5. Use the High-Ground Maneuver to frame yourself as the wise adult in the room. It forces other people to join you or be framed as the small thinkers. I'll be honest: I have lost debates to skilled persuaders who used this tactic. It's especially useful when debating people (like me) who tend to get lost in the details. Big-picture thinkers always win the crowd.

6. Studies say humans more easily get addicted to unpredictable rewards than they do to predictable rewards. Someday, I'll start a separate file for persuasion tricks that take advantage of the perverse aspects of our nature. This one will definitely be in the file. Excitement, even the logically undesirable types, beats boredom every time.

7. Visual persuasion is more powerful than non-visual persuasion, all else being equal. And the difference is large. Adams demonstrates how President Trump is a master of this. I am studying his technique and will build on this tip further in a separate post at a later date.

9. Simplicity makes your ideas easy to understand, easy to remember, and easy to spread. You can be persuasive only when you are also memorable. One of the first things they taught us in Journalism 101 was to write at an 8th-grade level. Why? Because that's the average reading level. I took the lesson to heart, and it has served me well. Indeed, it is one of the secrets of my success.

10. If you are trying to get a decision from someone who is on the fence but leaning in your direction, try a "fake because" to give them "permission" to agree with you. The reason you offer doesn't need to be a good one. Any "fake because" will work because people are looking for a reason to move your way. As Adams mentions, this was proved using a fascinating study about copy machines. Giving any reason for cutting to the front of the copier line worked remarkably well, even when the reason was totally lame or made no sense.

To get the other 21 persuasion tips, you'll just have to read Win Bigly: Persuasion in a World Where Facts Don't Matter.