What I Learned at Cialdini's Persuasion Workshop 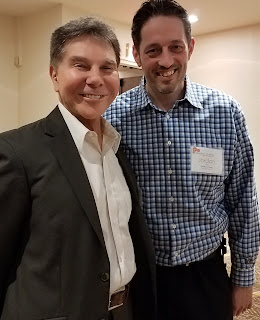 I’ve been a fan of Dr. Robert Cialdini’s work for some time having read his seminal book, Influence: The Psychology of Persuasion (now autographed by the man himself!) and his new sequel, Pre-Suasion: A Revolutionary Way to Influence and Persuade (also autographed!).

Now that I have become a 'man of means,' I've started indulging my desire to meet my intellectual heroes and learn from them in person if possible. In researching Cialdini with this in mind, I discovered and recently attended his Principles of Persuasion (POP) workshop in Tempe, Arizona.

The workshop was primarily led by Dr. Gregory Neidert who picked up the mantle and taught the persuasion science course at Arizona State University when Dr. Cialdini retired from teaching. He, too, is now retired and has moved on to consulting and running workshops for Cialdini’s firm. The POP workshop was two intensive days focused on exploring the six principles of persuasion from Influence. Dr. Cialdini gave an opening lecture the first day and then gave a talk about his new seventh principle (Unity aka the power of “we”) during lunch. He also graciously met us for a Q&A cocktail hour after the first day was complete, which is when he signed my books and posed with me for the picture above.

Everyone had questions, of course, mostly about their personal problems. I used my opportunity to see if I could resolve a Twitter mystery. Cartoonist and political commentator Scott Adams has been promoting the idea that Cialdini consulted for Hillary Clinton’s campaign and that this is the moment her persuasion game went from non-existent to equal-to-Trump during the campaign. He refers to Cialdini as the “Godzilla of persuasion,” or just “Godzilla.”

I wondered if Dr. Cialdini would confirm or deny?


Me: “I have one, off-the-record question for you, sir. Are you, in fact, Godzilla?”

Cialdini: (grinning widely) “I’m not sure if I should be flattered or offended by that nickname. Do I destroy cities?”

Me: “Well, I don’t think they mean you have it in for Japanese people or anything.”

He then turned to address another question. Oh well.

Although I didn't learn whether Cialdini is Godzilla,*  I did learn quite a bit from his workshop. Below are a few things that stuck with me.

1. Contrast is the ultimate persuasion amplifier. As mentioned, Dr. Cialdini has seven principles of persuasion in total. Contrast isn't one of them. That's because it is what he calls an "amplifier," something that super-charges a persuasion technique. Dr. Niedert went further, calling contrast "the dark matter that holds influence together." In all of our exercises using all of the principles, we learned to use contrast to improve our persuasive punch. The best example of this involves the legendary advertising executive Rosser Reeves.

Reeves was a Madison Avenue man during the 50s and 60s, the time period portrayed in the AMC hit show, Mad Men. In fact, he was used as "one model for the professional accomplishments of the series' protagonist, Donald Draper (played by Jon Hamm)," according to Wikipedia. When I first got into the infomercial business, I was obsessed with these Old Masters of advertising (as I call them). I paid about $80 to acquire Reeves' book, Reality In Advertising, when it was out of print. It was worth the price. I picked up several great insights from Reeves, including the timeless concept of the "unique selling proposition" (USP), a term he coined.

At the POP workshop, I heard the following apocryphal story about Reeves:


One beautiful spring afternoon, Rosser Reeves and a colleague were walking through Central Park to their office on Madison Avenue. They saw a man sitting in the park begging for money. He had a tin cup for donations with a handwritten cardboard sign that read: "I am blind."

The man's cup contained very few coins. Reeves thought he knew why and told his colleague that he could dramatically increase the amount of money in the cup simply by adding four words to the sign. Naturally, his colleague was skeptical.

Reeves went to the blind man and offered to help fix his sign. The man agreed. Reeves took a marker from his pocket, added four words to the sign and then retreated with his colleague to see what would happen.

Within minutes, people were dropping one coin after another into the man’s cup.

What were the four words Reeves added to the sign? "It is spring and ..."

After telling this story, Dr. Niedert explained that contrast is always available to us. It's just that sometimes it takes a skilled persuader to see it and call people's attention to it. The people in Central Park that day saw and enjoyed a beautiful spring day. They saw and ignored a blind man begging for change. Simply by connecting the two things and creating contrast, Reeves persuaded them to change their behavior.

2. There is a moment of power after no. I've been in a lot of hard negotiations with the toughest negotiators imaginable. (I live and work in New York, after all.) Yet I never saw this before Cialdini's workshop. It's absolutely true. Dr. Neidert counseled us to resist the normal human response to rejection; i.e., shrinking back. "If you retreat from the moment, you lose," he said. "If you retreat in the moment, you win." What he meant is that a skilled persuader always has a fallback position, a prepared 'ask' that also represents a desirable outcome. More important, that second request is much more likely to be granted because of the principle of reciprocity. This is the "moment of power." The person who told you "no" feels you've given them something and that they owe you something.

Of course, this can be used in a manipulative way where your "fallback" position was your actual position all along. Dr. Niedert was careful to add he was talking about a position that was "not intended" to be the real position all along. He also explained at length how ruses by unethical persuaders can easily backfire, destroying the credibility and trust that is required for any successful negotiation.

I agree with him in principle, but I have met some people that are immune to feelings of reciprocity. They will gladly take whatever you give them and feel no obligation to give back. In these negotiations, I have found it's smarter to go in with a meaningless concession at the ready. To be more precise: The concession is meant to be meaningful in some way to them but not very meaningful to us. We then explicitly leverage that concession to get what we ultimately want. Not particularly ethical, I know. But it's very effective when dealing with negotiators who lack any type of empathy.

3. A limited-number offer is more persuasive than a limited-time offer. This was of particular interest to me because the limited-time offer is much more common in my business (infomercials). The classic example is a clock ticking down from 10 minutes, which is supposed to be how much time the viewer has left to order. I can only think of one type of offer that mentions a specific, limited number of units as a tactic: offers for collectible coins. They'll say something like, "only 500 of these coins were ever minted." Every other time, we usually say something cliché and vague like, "supplies are limited." Thanks to Cialdini's workshop, I'll be pondering how to fix this in future direct-response commercials.

These are just three of the many fascinating and useful things I learned during my two-day immersion course in Godzilla-level persuasion. I'll be sure to post more about it here and on Twitter.

* Scott Adams says Dr. Cialdini has confirmed he consulted for HRC's campaign. He may be referring to this article from the Financial Times where the author got a somewhat firmer answer than I did.