Science: Belief in the Experts? 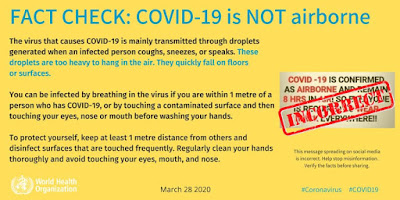 Feynman famously said that “science is the belief in the ignorance of experts.” In the real world, though, it seems the words “ignorance of” have been dropped from the definition. At least, that's the conclusion I often reach when reading about various scientific developments. Many times, I find one expert with influence has determined what scientists believed for decades.

A case in point is a recent Wired article about how the World Health Organization (WHO) went from declaring “FACT: #COVID19 is NOT airborne” in April 2020 (see above) to “placing the inhalation of aerosols at the top of its list of how the disease spreads” in May 2021. The problem appears to be a 60-year misunderstanding of something the first chief epidemiologist of the CDC, Alexander Langmuir, said about tuberculosis. His words seem to have led health scientists to believe particles must be 5 microns or smaller in order for any virus to be classified as “airborne.” (It turns out that even particles as large as 100 microns can spread through the air.)

The irony is that Langmuir's speech was an apology for his own blind belief in the experts that preceded him. In it, he confessed he had been wrong to dismiss the work of Harvard engineer William Firth Wells:

“Like his peers, Langmuir had been brought up in the Gospel of Personal Cleanliness, an obsession that made handwashing the bedrock of US public health policy. He seemed to view Wells’ ideas about airborne transmission as retrograde, seeing in them a slide back toward an ancient, irrational terror of bad air—the ‘miasma theory’ that had prevailed for centuries. Langmuir dismissed them as little more than ‘interesting theoretical points.’”

Langmuir's attitude toward Wells' ideas arguably set tuberculosis health policy back seven years. That was the amount of time that transpired between Wells' book about his findings (1955) and Langmuir's 'apology' speech (1962). Of course, that pales in comparison to the nearly 60 years that have transpired since that speech, which inadvertantly gave rise to the 5-micron myth.

We like to think science is a rigorous process of constant belief interrogation, but that isn’t even close to reality. It turns out scientists are just as lazy as the rest of humanity. They accept without question, assume without challenge and generally fall prey to all the same cognitive biases as the rest of us.