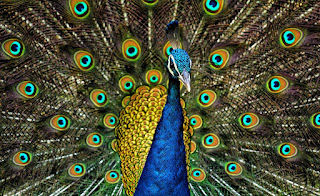 In the animal kingdom, the most visual and well-known symbol of mating fitness is the colorful plumage of the peacock. I first saw this bird's name converted to a verb and used in a human context when reading a fascinating New York Times best-seller called The Game: Penetrating the Secret Society of Pickup Artists. Here's a definition, courtesy of a site called "The Alpha Lounge":


Peacocking is a term used by pickup artists (PUAs) to describe the act of wearing bright, flashy, attention-getting clothing. This was made famous by Mystery (the pickup artist most known for his VH1 show 'The Pickup Artist') as part of his 'Mystery Method' for attracting and seducing women. Mystery is known for taking this strategy to the extreme where he and his understudies would be seen wearing shiny shirts, light-up jewelry, feather boas, colorful cowboy hats, goggles, 5-inch platform boots, and anything else to make a PUA stand out in the crowd.

The theory behind peaocking is that the more attention one can draw to them self, the easier it will be to grab the attention of women and ultimately attract and seduce them. It is also said that the act of wearing such outrageous accessories and pieces creates the perception of confidence and comfort with one's self image. Someone who is not afraid to stand out in the crowd and be different is someone that most women will find attractive.

Once upon a time, I verified the effectiveness of this tactic with an experiment in the field. It was my friend's birthday, and he always likes to get all of his college buddies together for steaks, cigars, drinking and other male-oriented fun. This particular year, he decided we should all get tickets to a festival featuring "beer, bourbon and BBQ." We agreed and had a sufficiently raucous time until we shut the place down.

The night was still young, so our next move was to hit the local bar scene. On the way out the door, I realized some of us were still wearing the 'party favors' the organizers had been handing out. A few of our group wore pig noses (something to do with BBQ) and ball caps with silly slogans. I was wearing a stuffed Viking helmet (something to do with beer). Whether it was my state of inebriation or my new fascination with the idea of peacocking, I decided to continue wearing the helmet for the rest of the night to see what would happen.

The result: I received about 10 times more attention from women than I had ever experienced before. The drunk ones didn't even ask before groping my horns. The less-inebriated ones asked permission and the obvious question: Why are you ..? I was ready with an answer. "It's Viking Appreciation Month, and I'm of proud Scandinavian heritage." I said it with a straight face, and it worked — most of the time.  It fell decidedly flat when I happened to say it to two women from Finland. (Come to think of it, though, I still had a fun conversation with them.)

These days, the meaning of peacocking has expanded somewhat to mean any display a man makes to appear more desirable to women. Take, for example, a recent experiment involving how charitable men become when they are around attractive women. As recounted in the UK's Daily Mail:


Men and women were asked to play a 'public good' game on a computer in a group.

They were each given £3 at the start and could either chose to put in into a group account that would then be doubled at the end of the study and distributed between 6 random participants, or keep the money in a private account.

Participants were watched by either a male, female, or no one.

It was found that men donated far more when watched by a member of the opposite sex, while women's donations remained much the same in all three conditions.

Men's donations also correlated positively with their attractiveness rating of the female observer. The research, published in the British Journal of Psychology notes that men also volunteer more time to charitable acts when they were watched by a female audience.

In addition, men perform more acts the more attractive they rated the female observer to be.

Recently, I've heard an even broader application of the term peacocking, one that makes it synonymous with so-called "virtue signaling." That is, some are using the bird's colorful plumage as a metaphor for those who work hard to demonstrate their supposed moral superiority instead of their mating superiority. No word on how persuasive this is yet. (I've only heard it used as a critique.)

However you use the term, it's the human exploits it references that are important to remember. To recap, here's what we know so far:

I suspect the reverse is true in both cases, but I haven't seen the research yet to back that up.