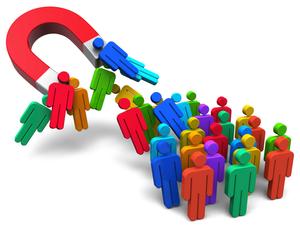 You've heard that "opposites attract," but social psychologists beg to differ. They say we are actually attracted to people who have traits, values and interests in common with us. This theory is called similarity attraction effect.

Vanessa Van Edwards from The Science of People advises:


When you first begin speaking with someone, make it your mission to find out what you have in common. This could be sports teams, favorite restaurants or people you know in common. Not only will this increase your likability, but it also gives you more to talk about!

This is in-line with the sixth of Cialdini's Principles of Persuasion  — liking. "People prefer to say yes to those that they like.” In one experiment, simply discussing a thing both sides had in common resulted in a successful negotiation 90% of the time. (Congress take note.)

Both Van Edwards and Cialdini advocate an ethical use of the similarity attraction effect, but there are less ethical uses employed by trained persuaders. One is intentional "mirroring" in which a person purposefully mimics the gestures, body position and even speech patterns of a target to increase liking. (This can also happen sub-consciously, but I am referring to the conscious selling technique.) We have all met the too-obvious salesman that probes us with annoying questions, desperate to create an artificial bond he hopes will make us more compliant. "Hey, you like baseball? You a Yankees fan? No, what about basketball? You a Knicks guy? I can get floor seats!" Etc.

Another tactic is known as the "Benjamin Franklin Effect," and it is counter-intuitive at first. Here's the story of how it got its name, via Farnham Street:


Having heard that he [a rival legislator] had in his library a certain very scarce and curious book, I [Franklin] wrote a note to him, expressing my desire of perusing that book, and requesting he would do me the favour of lending it to me for a few days. He sent it immediately, and I return'd it in about a week with another note, expressing strongly my sense of the favour. When we next met in the House, he spoke to me (which he had never done before), and with great civility; and he ever after manifested a readiness to serve me on all occasions, so that we became great friends, and our friendship continued to his death.

Franklin summed up the effect this way: "He that has once done you a Kindness will be more ready to do you another, than he whom you yourself have obliged."

If you think about it, this particular persuasion trick is devilishly clever. The Trojan Horse is being in someone's debt because of a favor granted. Inside the horse is both flattery and convincing proof of your similarity.