Sex Sells, But Fear is Stronger 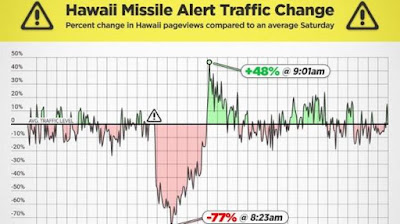 The story is now infamous: Around 8 AM this past January 13, Hawaii residents received an official government alert that a ballistic missile was hurtling towards them. The emergency text advised them that they should seek cover immediately. It ended with a familiar yet chilling warning: This is not a drill.

About 45 minutes later, residents received a second text that went something like this: Oops, sorry. False alarm!

Many have commented on what this says about faith and morality in America today. But there's a lesson here for would-be persuaders as well. It's a scientific fact that the most powerful motivator of human behavior is the drive to reproduce. The need to satisfy this drive manifests itself in many ways, some quite obvious (e.g. PornHub's popularity) and some more subtle. For example, trained persuaders in marketing or sales know sex appeal is one of the strongest persuasion tools one can employ. As the old advertising saying goes: "Sex sells."

However, there is a force stronger than even the need for sexual satisfaction: FEAR. If you have any doubt, just take another look at the chart at the top of this post. This, in turn, suggests that a fear-based appeal can be even more effective than a sex-based one when trying to persuade.